Home » Is the PMP exam going to change with the release of the PMBOK 7th edition? 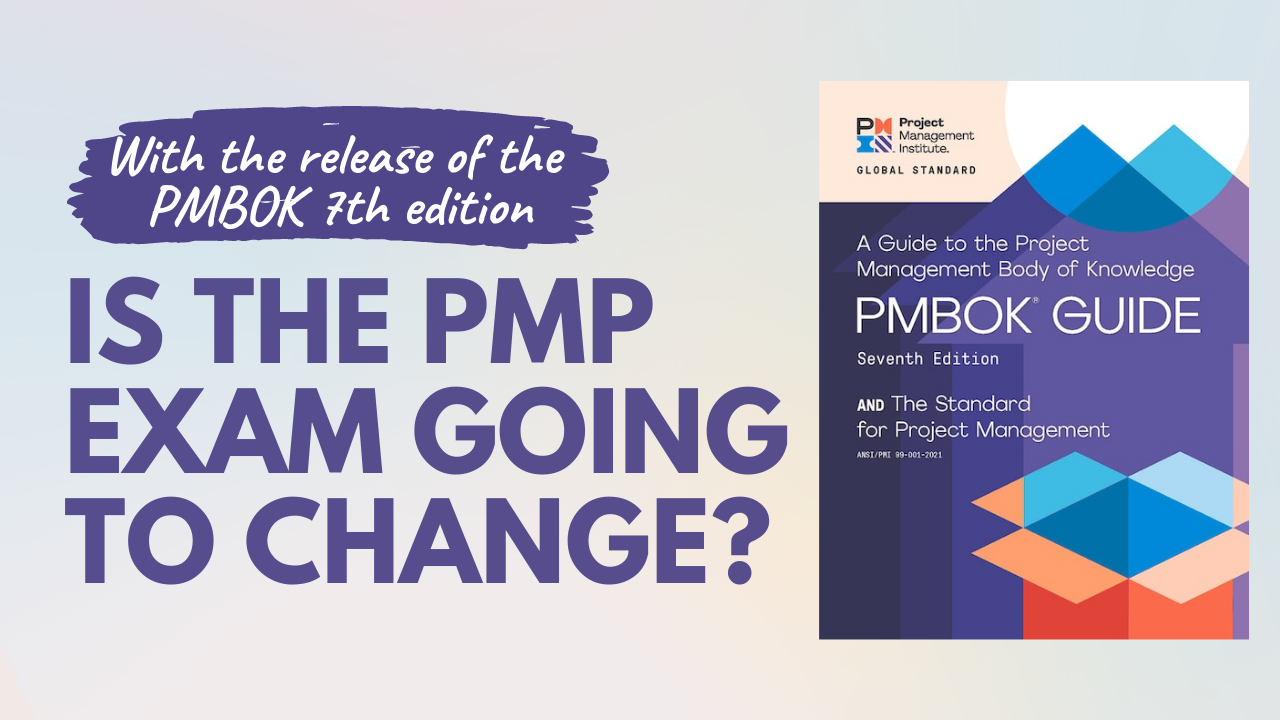 The Project Management Professional (PMP) certification was and still is a compass for prospective project managers to test and prove their ability to perform the duties and responsibilities that their position entails.

The credential went through a continuous evolution over the last 37 years, which often occurs after releasing a new version of the Project Management Body of Knowledge (PMBOK), considering it’s one of the certification exam’s main reference guides.

That is what raised an important question lately, with the upcoming release of the PMBOK 7th edition; Will the PMP exam be updated as a result of the changes made on the PMBOK?

Is the PMP exam going to change?

With the scheduled release of The PMBOK guide 7th Edition on the 1st of August 2021, PMP aspirants were wondering if it’ll have any impact on the certification exam. Let’s start by saying that the exam is not based on the PMBOK; the PMP exam follows the Examination Content Outline (ECO). Plus, the PMBOK guide is only an input to preparing for the PMP certification along with 10 other recommended reference books.

So, no, the PMP exam will not be immediately changed after the release of the PMBOK 7th edition as we concisely mentioned in our Everything you need to know about the PMBOK Guide 7th edition blog post. The PMI has repeatedly cleared this matter by stating that the release of a new PMBOK Guide does not mean consequently changing the PMP exam. Additionally, the PMP exam was already updated not a long time ago in January 2021. So, another edition for the exam will not be released, at least not for now.

We strongly recommend that PMP aspirants refer to the PMP exam ECO and use the recommended reference titles for their preparation. Thus, you should continue using the PMBOK guide 6th Edition as one of several exam references.

The evolution of the PMBOK guide and the PMP exam

Feeling the need to put together an official guide to promote the development of the project management profession, The PMI created and published the Ethics, Standards, and Accreditation (ESA) Report in August 1983.

Consequently, the PMI initiated its first project management certification program in 1984, witnessing the 1st edition ever of the PMP certification exam which was based at the time on the ESA report.

The ESA report was later upgraded to generate the PMBOK as we know it, presenting the 1st version of the Project Management Body of Knowledge guide in 1996. The PMBOK guide continued its evolution as the field’s theories and practices were progressively being defined and refined.

In 2000, the PMI released the 2nd version of the PMBOK followed by a 3rd in 2004 and a 4th in 2009. The guide was continuously subject to extensive revision in an attempt to document standard project management practices.

Meanwhile, the PMP which was becoming the de facto standard in the world of Project Management certifications was also going through changes in accordance with the PMBOK and ECO updates.

In January 2013, the 5th edition of the PMBOK was introduced, followed by an updated version of the PMP exam in August of the same year. In June 2015, the Examination Content Outline (ECO) was released presenting PMP’s blueprint and basic outline. The certification exam was then changed in January 2016, while still using the PMBOK 5th edition as one of its preparation references.

In September 2017, a newly updated 6th edition of the PMBOK Guide was launched, and even though the ECO kept its 2015 format, the PMP exam was again changed in March 2018 to ensure accurate use of terminologies and to match the process groups, tools, and techniques addressed in the exam to the PMBOK Guide 6th edition’s content.

In May 2020, the ECO did witness some alterations followed by a newly adjusted edition of the PMP exam in January 2021 while keeping the PMBOK 6th edition untouched.

The estimated date of the upcoming PMP changes

Taking into consideration the pattern of the Exam Content Outline previous releases, the PMI tends to update the ECO every 5 years or after a period of 2 to 3 years following a newly released edition of the PMBOK guide. Hence, we estimate that the next ECO will be launched around 2024-2025.

However, there is a chance that the PMP exam will be updated earlier. Historically, the certification exam goes through changes every two years or after 6 months of presenting an upgraded version of the ECO or of the PMBOK. Consequently, we can assume that the PMI will update the exam either in 2022 or 2023, to include the new terminologies and concepts introduced in the PMBOK 7th edition.

These are mere predictions; it’s probable that the PMI won’t follow the same pattern that they established throughout these years. However, they usually grant a 6 months interval before conducting any changes on the exam in order to allow providers to update their training content and PMP aspirants to decide which exam version they want to take.

Changes in the PMBOK guide surely affect the PMP certification exam, but this does not mean that the exam is based on the guide. So, aspirants who have started preparation for the exam in 2021 based on PMBOK 6th edition, do not panic! You’re going to take and ace the examination using the current version of the PMBOK guide. Just keep in mind that for accurate preparation, you should refer to all reference books recommended by the PMI as we previously explained in our 2021 PMP certification: what you should refer to when preparing for the exam blog post.